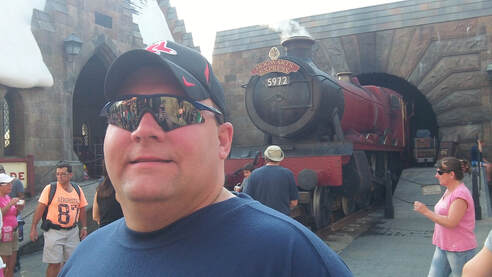 Growing up in Florida, some of my greatest life memories have come from visiting Theme Parks. From middle school band trips to Busch Gardens Tampa and Wet 'N' Wild in Orlando, guys' trips to Universal Orlando Resort, and Walt Disney World as a young adult and taking my youth group as a youth pastor, I have spent a lot of time making memories at the area theme parks and water parks!

The best of experiences in theme parks I can say have come the last 11 years of my life. In 2009 I was able to go with my girlfriend at the time Stacey, to the most magical place on earth, Walt Disney World! We had planned a trip down to Florida for her to meet my family and decided to stop in Orlando for a few days to relax and visit the parks. Her family along with her Nana and Papaw went to Disney most years, as she retells the adventures with family often. This is where the story gets good, as I had planned to propose to her at Disney in the Rose Garden at the Magic Kingdom (the Rose Garden is not there anymore). I had it all planned on the 4th of July in 2009 so we made our way to the Magic Kingdom. What Stacey did not know was that I had invited her parents down to see the proposal and to be a part of her special day. So as I waited for them to meet us in the park, I had to creatively stall with faking illness and multiple restroom stops! The time had finally come, and her parents signaled they were in the park, so we went down to the Rose Garden.... and she was not impressed with. I asked for her camera so I could take some pictures of us and when I gave it back so she could put it up, I got down on one knee and proposed to the love of my life. After asking if I was serious, she said yes! To make things even more magical I told
her to turn around where she saw her parents and at that moment, like I had planned it somehow, the show at the castle had fireworks. It was one of the most magical times at Disney we have ever had.

My wife and I got engaged at Disney. We honeymooned at Disney. We went on a babymoon to Disney. We took our daughter to Disney when she was 3 months old for her first haircut at the Main Street barbershop. We celebrated 10 years of marriage at Disney. We renewed our vows at the beach at Fort Wilderness on Bay Lake. We are Disney people. Seeing my daughter's face light up when she sees Tinkerbell or having her ask me when we are going back again fills my heart with joy.

I am a theme park person. How can I help you find the joy that I do with my family by going to theme parks? My love for theme parks is so big, that I started a theme park blog with my college friend Tim called Theme Park Dads (themeparkdads.com)!

Working with Magic Bound Travel, I can help you to have the perfect vacation to the Universal Orlando Resort as well as one of several Disney Destinations including Walt Disney World, Disneyland, California Adventure, Adventures by Disney or even a trip on a Disney cruise line.

I look forward to helping you plan your family vacation!